LED Bulbs for Outdoor Use

Led bulbs are great for indoor and outdoor use. However, an LED that will be used outdoors should be rated for outdoor use. Most bulbs have a UL (Underwriters Laboratory) rating. Depending on the amount of exposure the bulb will face, you should use an LED bulb with a wet/damp rating or at least a damp rating.

Picking an LED Bulb to Use Outdoors

Generally speaking, most light bulbs, whether incandescent, fluorescent, CFL, or LED will have a UL rating. The UL rating will indicate in what conditions the bulb can be used. Bulbs rated for indoor use should not be used outdoors. Bulbs rated for outdoor use can be used outdoor or indoors. Since they are built to withstand the elements, they work just as effectively outside as inside.

The biggest issue with outdoor lighting is the unsafe mingling of water and electricity. Depending on where the bulb is placed and what sort of fixture it is placed in, different measures and constructions may be required to keep a bulb from getting wet.

Incandescent bulbs are available with indoor ratings as well as damp and wet/damp ratings. Fluorescent and CFL bulbs are more problematic. Both react poorly to cold. Some fluorescent lights are built to work in cold temperatures, so if you are using fluorescents outside you want to make sure you get outdoor bulbs. CFL bulbs may not work at all in the cold, so they are recommended for indoor use only.

LED bulbs are particularly suited for outdoor use, due to their construction and the general mechanism that creates LED light. However, if you will be using a bulb outdoors you should still look for the appropriate rating, both for your fixture and your bulb, to avoid damage to the bulb or a possible safety hazard. 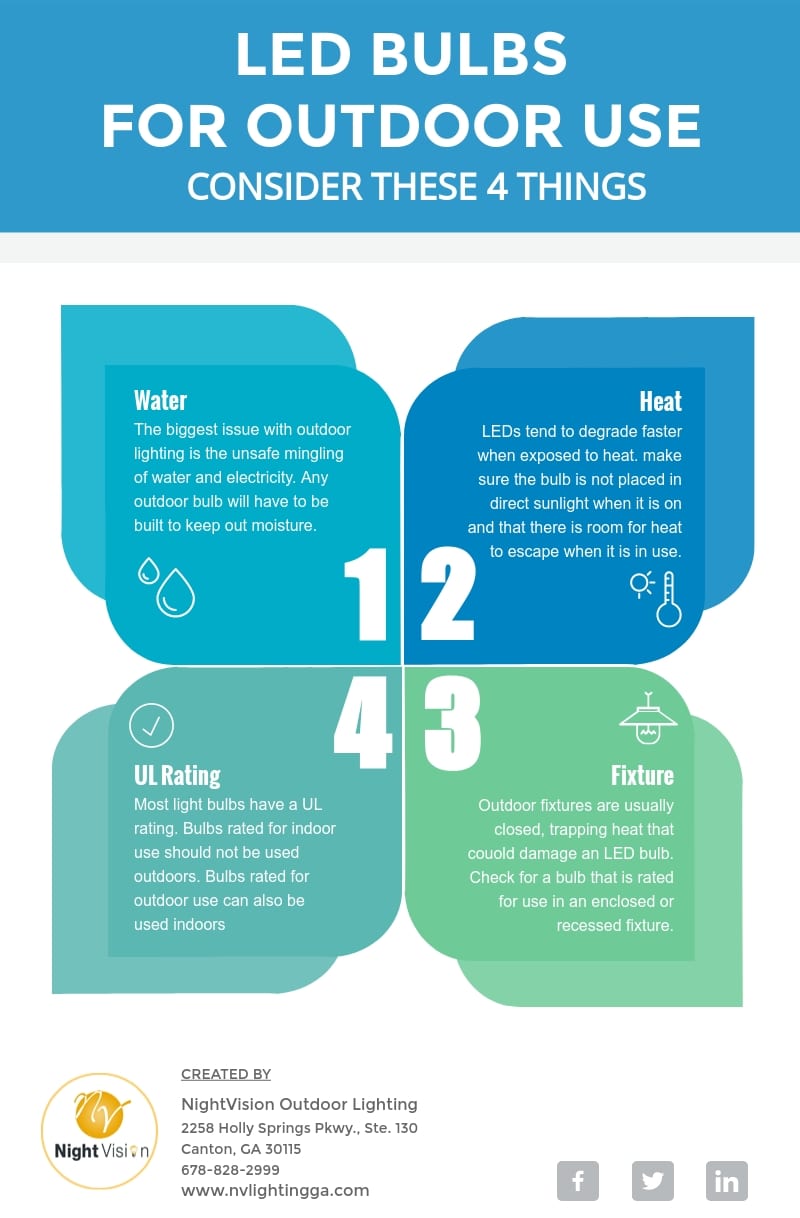 LED stand for “Light Emitting Diode”. A diode is a semiconductor device with two terminals. It controls the direction of a flow of electricity. In an LED, a light emitting diode, the diode produces light through a “p-n junction”.

The amount of energy lost by the electrons affects the power of the photons, which is how different colors are produced. The color is also affected by the material of the bulb and the current that is running through it. Unlike other bulbs, none of the energy being released is in the form of heat, so LED bulbs are cool to the touch and waste no energy on heat production. This is one reason they are so energy efficient. It is also why LED bulbs are mostly unaffected by the ambient temperature.

The biggest issue that traditional bulbs have is cold weather. While incandescents mostly do fine, regular indoor fluorescents can flicker and CFLs can take along time to come on and reach full brightness. (There are outdoor and cold temperature rated fluorescents and CFLs that work better in cold temperatures.)

LEDs produce very little heat of their own, so it may be surprising that the enemy of an LED is not cold, but heat. LEDs tend to degrade faster when exposed to heat. That’s why many LED bulbs you buy for your home and little fins around the base. They are designed to release heat as efficiently as possible.

The first LEDs produced in the early 1960s produce a very low energy light in the infrared spectrum. The light was invisible to the human eye. This type of light is still used in many remote controls for television and other electronics. Modern LEDs have been developed to produce a wide variety of colors with high luminosity. In other words, you can get very bright colored light.

In more human terms, lower color temperatures are (confusingly) warmer to the eye, like candlelight or soft white incandescents. Higher color temperatures appear blue and cool, like moonlight. The range of warm to cool or yellow to blue lighting choices can create a variety of effects for outdoor lighting.

Just like bulbs are rated for outdoor usability, fixtures may have various capability to withstand the elements. Fixtures can have a UL Listing of Dry, Damp, or Wet, both for indoor and outdoor use.

Dry ratings should only be used indoors in areas that are not affected by moisture or condensation. This includes most areas of a home, but excludes indoor pool areas, utility/laundry rooms, and fixtures directly above a shower or bathtub. Damp rated fixtures can be used indoors in areas that are affected by condensation, but are not in direct contact with water. For outdoor use, a damp rated fixture should only be used in a protected area that never comes directly into contact with water (rain, snow, or any other type of precipitation or runoff), even during storms. For any location outdoors that comes into contact with water, use only a wet rated fixture and bulb.

Will Any Fixture Work for an LED Bulb

The answer to that is both yes and no. As noted above, LED bulbs produce very little heat, but they produce some. And because LEDs are especially sensitive to heat, it is important to get that heat away from the diode itself. LED bulbs are built with a heat sink in the base of the bulb that draws heat energy away from the diodes, causing an unfamiliar result: LED bulbs are cool where the light is, but the base can be quite hot.

The heat that has been drawn to the base of the bulb has to go somewhere, and in open fixtures this isn’t a problem. The heat dissipates into the air. But for outdoor lighting you will see a much higher number of partially or completely enclosed fixtures. They are designed to keep moisture and the elements out, but that same design can keep diode killing heat inside.

This isn’t a huge problem. There are plenty of LED bulbs that are made to work in enclosed fixtures. But before you go purchasing a bulb for your enclosed outdoor fixture, it is important to check for a bulb that is rated for use in an enclosed or recessed fixture.

LED bulbs have a ton of benefits. They are energy efficient and cheap to run. LED bulbs can last up to 20 years, making replacements a rare occurrence. They come in a variety of brightnesses and color temperatures (warm and soft to cool and blueish). They are slightly more expensive for the initial investment, but NightVision buys in bulk, reducing the cost for homeowners.

You can learn more about the different types of lighting project NightVision Outdoor Lighting offers here. Once you have built up your inspiration, go ahead and contact us for a free consultation and estimate.