What is the Difference Between LED and Halogen Systems?

Posted Jul 15 2019 by ODWAdmin in Blog, LED Lighting with 0 Comments

Designing and building your home or commercial outdoor lighting system comes with a series of choices you have to make. To start, a NightVision specialist will meet with you to determine your goals, what you want your completed system to look like, and what your budget is. From there, we’ll help you design a system that fits your needs, preferences, and financial realities. One of the many choices you have to make is the type of lights you will use in your outdoor lighting system. LED and Halogen systems are the two most common lighting systems in use currently. Deciding which one you want can be a big decision, and will affect how your system runs well into the future.

Making the right choice is important. You don’t want to have regrets and be stuck with something that doesn’t meet your needs or that costs you too much for the value you get from it. There are plenty of different kinds of outdoor lighting systems to choose from on the market today. Only you can decide what type of system and bulbs you want to have. For example, there are differences between LED and halogen systems that should be considered, so you can choose the system that works best for you and lights up your space properly. 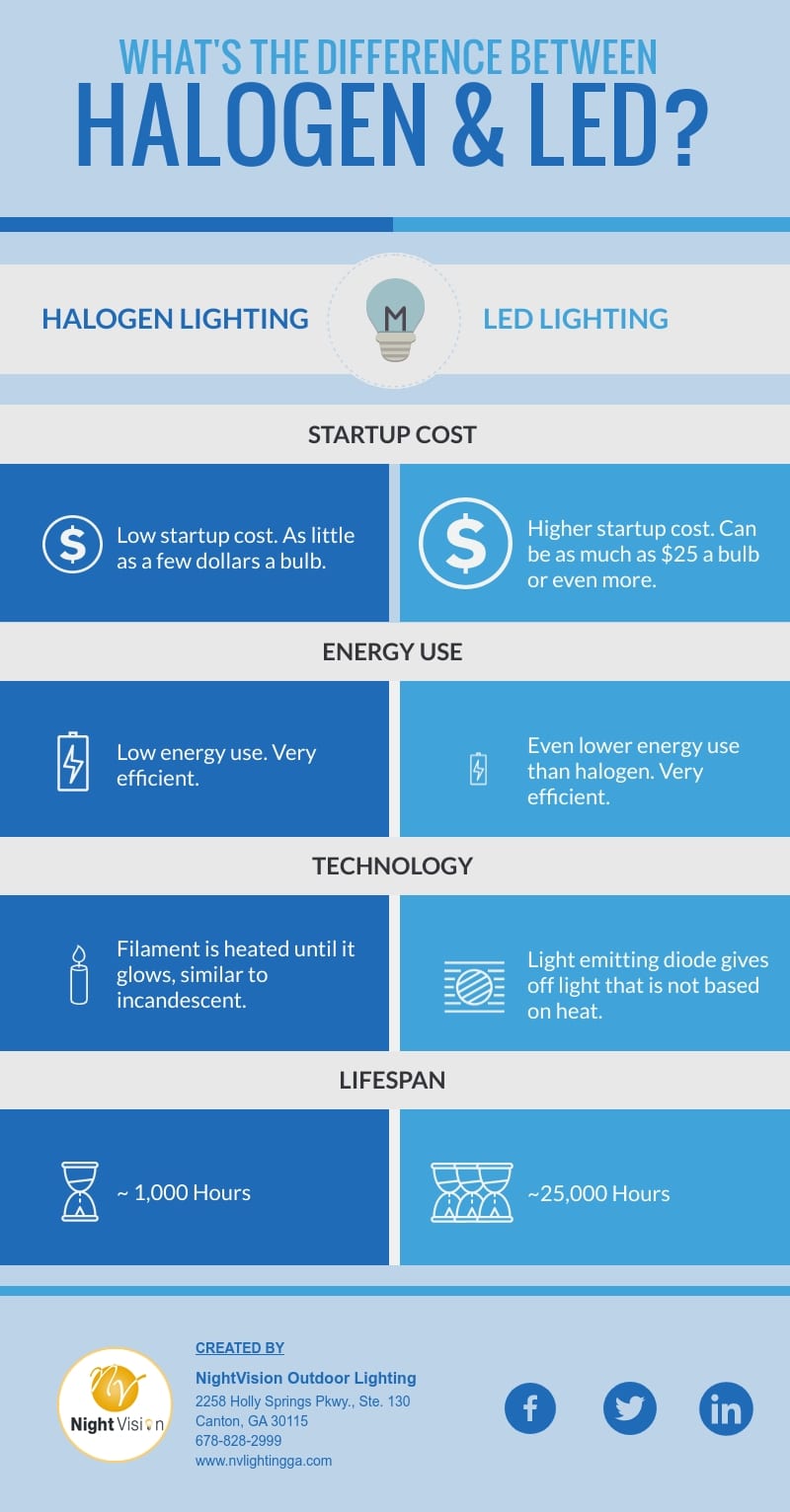 However, the specifications of a halogen bulb mean that it has a much lower use of electricity than traditional bulbs. So you can save a lot of money on an electric bill if you use them in all your fixtures. They also shine brighter than typical incandescents, making them great for outdoor lighting. With a lifetime of approximately 1,000 hours, they do burn out more quickly than some other options. So they aren’t as cost effective as their low energy use may make them seem.

Differences Between Halogen and LED Systems

Still, LED and halogen systems have some significant differences. Among the significant advantages of halogen bulbs is that they can be used with a dimmer switch. That is not always the case with some of the newer bulb options. While dimmable LEDs exist, they can cost quite a bit more, and may not be available with as many other options. Another important difference between LED and halogen systems is that halogen bulbs cost just a few dollars each. That makes them affordable for people who are switching away from the older, incandescent bulbs, but who don’t want to spend too much on the new bulbs. If you have a lot of fixtures in your outdoor lighting system, upgrading your light bulbs can become expensive. So a lower cost option is often the right choice for your outdoor lighting.

LEDs, or light-emitting diodes, used to be so expensive that most people couldn’t afford to buy them. Now, though, things have really changed. The price gap between LED and halogen systems is still pretty wide in terms of the initial investment. But the companies that manufacture LED bulbs have found ways to reduce the costs while keeping the quality. This has allowed many more people to buy LED systems for their homes.

The light these bulbs emit has also been improved. LED lamps are now available in a range of color temperatures. You can get light that is much warmer and not as harsh as it used to be. The cooler look of CFL bulbs can also be matched by LED systems, giving customers options to choose from. In this way, the gap between LED and halogen systems is shrinking.

Until recently, LEDs remained a low percentage of the light bulb and lighting system markets. But that is changing as costs continue to come down. Today, most new outdoor systems are built exclusively with LED lights. NightVision uses LED lighting in all its new installations. Even older halogen systems are switching over to LED, which is clearly where the market is going in the future.