Artificial Moonlight: What It Is and How to Use It

Sitting under a full moon at night can be romantic, relaxing, or just plain beautiful. Unlike sunlight, moonlight tends to give the world a slightly bluish hue. That gives your surroundings a different look than during the day. Some describe moonlight as pale. Underneath the light of the moon colors may seem washed out and not as bright as during the day. Of course, the moon isn’t always shining. In those cases, artificial moonlight can create that same magical feel in your garden, even on a cloudy night. Knowing how to use this effect can create a beautiful addition to your home landscape lighting system. 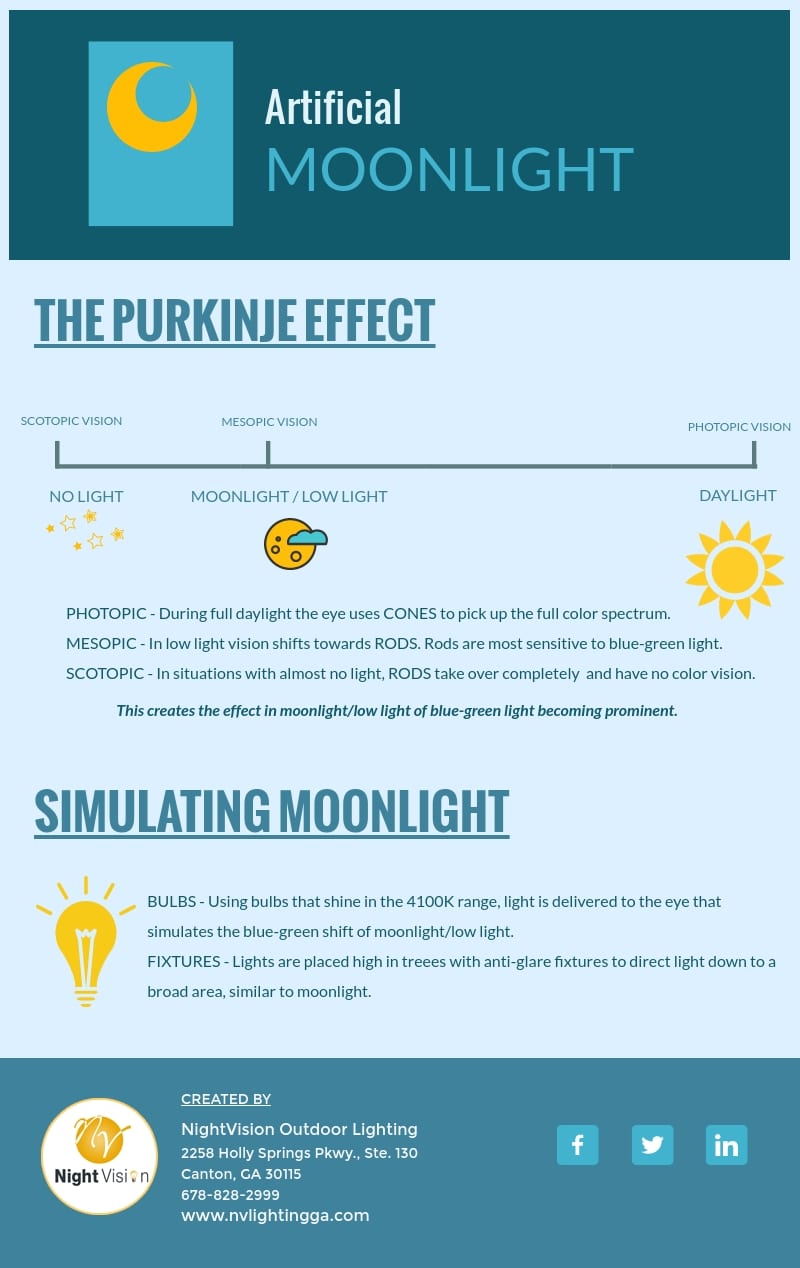 How Is Moonlight Different

When talking about moonlight, people often describe it as blue or even silver. However, even when calling it blue, it is not the same as shining an actually blue light on something. Taking a blue spotlight and shining it on your garden would definitely not look like sitting under a full moon. So why do we call moonlight blue?

To understand degrees Kelvin and its relationship to the warmth or coolness of light, we can imagine a piece of metal being heated by a blacksmith. The metal starts out as dark grey or almost black before it is heated. Then the blacksmith places the metal into the furnace. As the metal heats, it begins to glow. At first, the metal glows red. The temperature is still relatively low (compared to the higher temperatures it will eventually reach). So on the scale of degrees Kelvin, this would be a low temperature, around 2500K.

As the the metal heats up more, the red starts to give way to an orangey and then a yellow color. The temperature is rising and the color of the metal is becoming less red. In a colloquial sense we might say that its color is becoming cooler, even as the temperature is rising. If the blacksmith keeps the metal in the fire and continues to heat it, it will become a paler yellow. Eventually, if the heat rises enough, the metal will glow white hot. It has reached the highest possible temperature and its glow has reached a near colorless white.

Light temperature uses the same formula. Degrees Kelvin as a measure of light temperature is based on the idea that a hypothetical black object will glow a different color at different temperatures. As this hypothetical perfectly black item reachers hotter temperatures, the color it glows becomes less red. We might describe the visual effect as a cooler light, even if it is achieved by introducing more heat.

Why Does Moonlight Appear Blue

If the yellowness or whiteness of light is based on the temperature of a glowing object, it would seem that the sun should have a whiter light than the cooler moon. However, the apparent color temperature of moonlight is actually cooler than broad daylight. On a clear day, the sun shines at around 5000K. Moonlight usually appears to be around 4100K. But our perception of color during the day and at night is very different.

During the day, colors appear bright and distinct. Trees are green. Roses are bright pink, red, and yellow. Daylight gives a very true rendering of colors. At night, regardless of the temperature of the light, everything just looks a little bit blue. This is called the Purkinje effect.

The Purkinje effect is a result of how the human eye perceives interprets light and color. When there is plenty of light, the different wavelengths hit the receptors at the back of your eye and are interpreted by the brain as different colors. But when there is less available light (such as at night), the human eye shifts how it perceives light. At low enough levels of light, humans become practically colorblind. To see in this low light, the eye relies on receptors that are good as sensing light, but bad at rendering colors.

To effectively simulate moonlight, artificial moonlight needs to hit a color temperature that mimics the Purkinje effect. Simply lowering the amount of available light to moonlight levels might work in theory. But if your goal is to provide enough light to make use of outdoor spaces, that approach would be impractical. Instead, the use of cooler, though not entirely white, light can create the same effect as moonlight.

To create artificial moonlight, landscape lighting designers use bulbs that shine at about 4100K. This allows the eye to perceive colors in much the same way that it might under true moonlight.

However, the effect of moonlight is not limited to its effect on color. Another feature of moonlight is how it washes over everything. A spotlight in the 4100K would not give the impression of moonlight. So landscape lighting designers have to find a way to give a broad, even light that mimics how moonlight is distributed over a wide area.

Creating the effect of artificial moonlight requires more than just the right type of bulb. The placement and type of lighting fixtures that are used are also important. To create moonlight, landscape lighting designers use a particular type of downlighthing. Lights are placed as high up as possible, hidden in trees or on other tall landscape features. Using a light with a wide spread, the light is directed downward to cover a wide area, just like moonlight.

However, there is one more concern that has to be addressed. Simply putting lights high up in a tree is not enough. These lights need to be placed in special fixtures that guard against glare and make sure that light is directed downwards and not upward or to the sides. Without the glare guards, the light would illuminate the tree canopy, giving the impression of glowing trees. That is definitely not what you are going for if you are trying to imitate natural moonlight.

When to Use Artificial Moonlight

As with any type of landscape lighting, there are no hard and fast rules about what to use where. Ultimately, which lights you use depends on your personal sense of design and the effect you want to create. However, there are some general guidelines about how to use artificial moonlight that can help in your design process.

Artificial moonlight can be a great effect to use in your garden. However, like any special effect, it needs to be installed properly to create the right look. Knowing how to create this effect successfully takes some experience and technical knowledge, so it’s best to get some professional help. If you are considering using artificial moonlight in your outdoor lighting scheme, look no further than the professionals at Night Vision Outdoor Lighting. We specialize in creating the moods you want in your garden, including artificial moonlight. If you need some inspiration, take a look at some of our completed landscape projects. When you are ready to start building your own dream, just reach out and contact us to set up a free, no-obligation consultation.